Central Theater of Seville: A day with Jan Fabre behind closed doors in Annecy | Culture


The show is about to start, but the stage is practically empty. Barely a score of people dot the thousand seats in the room. Despite this, nerves are breathed on stage, since those who occupy those few seats are not anonymous spectators, but directors and programmers of important international theaters, exceptional guests to see a dress rehearsal of The fluid force of love to which EL PAÍS was also invited. It is the new work of the Belgian Jan Fabre (Antwerp, 62 years old), patriarch of the European avant-garde scene, creator of one of the most fascinating shows of the last decade, Mount Olympus, his famous 24-hour marathon that links a dozen Greek tragedies, which could be seen in Seville (2016) and Madrid (2018).

It happened just a week ago in the teatro Bonlieu from Annecy, a small alpine town known as the French Venice for its canals, where the first of the Show. But as in France and practically all of Europe the theaters are now closed to the public, the absolute premiere has become next May 8 at the Central Theater of Seville, a city that this season has become, together with Madrid and Barcelona, ​​a haven for creators of international prestige. The event has aroused great expectation and happiness in the Andalusian capital, as Fabre has a loyal audience there that has followed him since in 1992 he appeared for the first time at the recently inaugurated Central with his work Sweet temptations.

Jan Fabre was also happy last week in Annecy. The Belgian creator has not stopped working all this year at his headquarters in Antwerp, but the rehearsal at the Bonlieu was the closest thing to a function his company had done since the pandemic broke out. A kind of closed-door drill that anticipated the long-awaited reunion with the public in Spain. A rare representation, like almost everything in this time of pandemic, even more so in a country that is once again semi-confined, but in good company, because some of those programmers were the ones who discovered the Belgian at the beginning of his career and have become in friends over time. Among them, the director of the Bonlieu, Salvador García (of Spanish origins, by the way, the son of one of many families that emigrated to that area of ​​France in the sixties and seventies), and of course the director of the Seville Central, Manuel Llanes, who was the first to bring him to Spain in 1985 when he directed the now defunct Granada International Theater Festival. 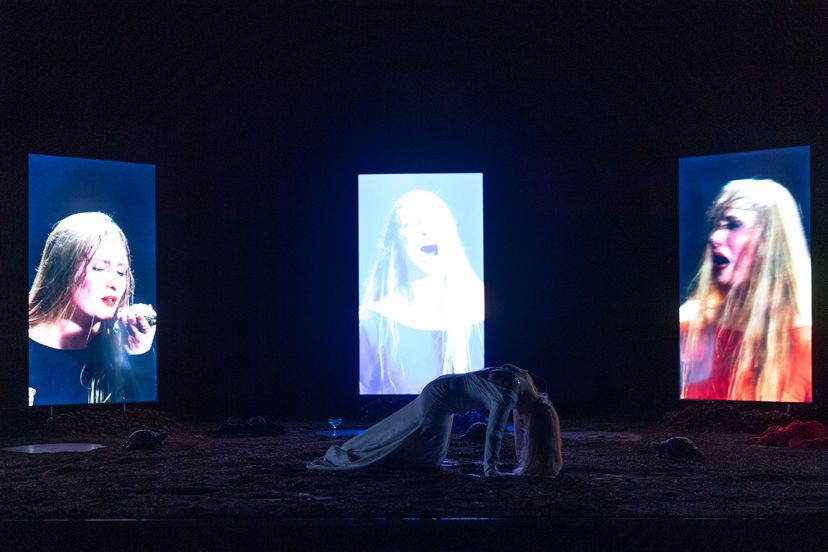 Stella Höttler, in ‘Resurrexit Cassandra’. On video, a fragment of the work.She BERGMANN

The stalls lights go out, the stage lights come on and the nine performers of the show are seen sitting at desks that suggest that we are in a classroom. The work, in effect, is like a class, but of a subject that is not taught in schools: it is a gender class, a study of how sexual identity is forged in our days and an invitation to free oneself from any label to to be able to live love as each one wants. Very Fabre style, combining text and dance, pushing gesture and word to the limit, but at the same time tremendously aesthetic. House brand.

In the spoken parts, the actors review the multiple unregulated forms that love can take: heterosexual, homosexual, bisexual, transsexual, intersex, hermaphroditic, asexual… What does it matter, they say: “Why should people choose to be something? Are we not human? We are living works of art. Is not sufficient?”. In the danced parts, the performers indulge in a liberating dance in which they themselves ingeniously transform their costumes to account for all this diversity: a simple jacket suit can be turned into a dress, skirt, petticoat or uniform. It is a vindication of sexual freedom, but there is also a lot of underlying irony, as Fabre himself explains after the performance: “It is a philosophical and poetic reaction to the dictatorship of gender. Love is anarchist and cannot be enclosed in categories, not even in those new ones that go beyond the norm and that, deep down, also label us ”.

That reaction may have something to do with your own personal circumstances. In 2018, about twenty artists who had worked on his montages accused him of sexual abuse and humiliation during rehearsals, something that the Belgian creator immediately denied, arguing that everything was consensual. The Belgian authorities opened an investigation that has not yet concluded and his company continues to receive public subsidies, but the shadow of the complaint keeps him under suspicion.

Since then, Fabre had only released one show at the end of 2019, rose Cassandra;, a poetic monologue written by the Italian Ruggero Cappuccio starring the great visionary of the Greek theater, whose tour was interrupted by the pandemic. So the Belgian took advantage of the presence of the programmers in Annecy last week to also offer them a special screening of this work, with the aim of retaking it as soon as the theaters reopen in Europe. And the actress-dancer Stella Höttler, prodigious like all the performers who work with Fabre, dazzled them all. Tragic and haunted by her visions, Höttler resurrects the myth to launch a new prediction: polluted water, islands of waste, open wounds in nature. Another disaster that no one seems to want to hear.

After both performances, Fabre and his team met the guests in the Bonlieu’s grand foyer. Nobody knows when the theaters will reopen in their respective countries, but they all make plans with the illusion that next season will be “normal”. Meanwhile, they continue to work in the shadows, because although the theaters are closed in Europe, they are still used as creative spaces for artists, through residency programs such as the one that has allowed Fabre to finish mounting his new show in Annecy . It is an undercurrent of culture bubbling up invisible under a seemingly static surface. It is close to seven in the afternoon and through the windows you can hardly see anyone in the streets of Annecy. The curfew is about to begin.

The fluid force of love

Concept, set design, direction and text: Jan Fabre. Central Theater of Seville. May 8 and 9 at 12 noon.