The 26th of June, Hamlet Lavastida, 38-year-old Cuban artist He was serving the sixth day of mandatory confinement at his home in Havana after returning from a year of artistic residency in Berlin. But that morning he saw something different from his window: a suspicious man heading for his building. She imagined the worst, so she quickly called a friend, Katherine Bisket, according to her on Facebook. If it had not been for those seconds of conversation, perhaps his whereabouts would not be known. Lavastida has been in the Villa Marista prison for almost two weeks, a center known as a place of torture. “They call it ‘Where the whole world sings’, after an old music contest on Cuban television,” says Marco A. Castillo, a Cuban artist, former member of the Los Carpinteros collective and a friend of Lavastida, who is accused of “inciting to commit a crime ”. Without further details. The echo of the arrest has reached the contemporary art fair Arco, in Madrid, which this Thursday is hosting an act of denunciation of these events. In addition, a collective of Cuban artists and intellectuals will print the slogans of the movements opposed to the Cuban regime on five-euro bills and will launch them through Arco as a collective performance call The ticket burning the street, just as Lavastida intended to do in Cuba. Attendees will be able to bring their tickets for the artists to intervene and thus be part of this action.

Tribune: The Cuban Dystopia, by Marco A. Castillo

The only evidence against Lavastida is a message in a private chat in which the artist suggested to his acquaintances marking Cuban banknotes with symbols that allude to the new opposition movements that have emerged against the Castro regime, now led by President Miguel Díaz -Canel. “We are outraged by this violation of the privacy of citizens,” claims a letter from protest signed by 140 Cuban intellectuals demanding their release. “For the unjust accusations against our colleague and, fundamentally, for the fact that the Cuban Government is criminalizing the exchange of ideas and the exercise of imagination.”

Lavastida is a dissident artist who, like several rappers or painters on the island, has defied the propaganda of the regime. His work in posters, graffiti, collages o videos have focused on the archives that build the “totalitarian identity of the Cuban revolutionary process”. “You have to get closer to the complexity of Cuba beyond the typical scenes of tobacco and coffee,” he said in an interview, four years ago, about his work called Prophylactic Life.

This arrest is the latest and most visible of a dozen arrests that the Cuban government has made in the last two months, considerably increasing the repression against dissident musicians, painters, journalists or citizens. As happened with other incarcerated such as the artist Luis Manuel Otero (free, but under constant surveillance), and the rap singer Maykel Osorbo, arrested and accused of “contempt”, “resistance and” attack “(he is known for being part of the group who recently performed the famous song that angered the Government: Homeland and Life, an opposition version of the motto Homeland and Death). Criticism and protests have left the island and have found a sounding board in other countries such as Spain. This Thursday, Castillo, the curator and art critic Gerardo Mosquera and the Mexican curator Cuauhtémoc Medina have organized a meeting in Arco to denounce the situation of his colleague and that of others such as the journalist Esteban Rodríguez, the artist Tania Bruguera or the friend a which he called Lavastida, the poet Katherine Bisquet, according to denounced José Miguel Vivanco, director of Human Rights Watch for the Americas.

In Berlin, Lavastida was awarded a scholarship in the Bethanien art gallery international program for a year, funded by the KfW Foundation, the German development bank. In April he opened a solo exhibition, Prophylactic culture, a room of the Bethanien art center. “He is a brave artist” who “with his works makes use of his right to freedom of expression,” says the gallery, which on the 9th returns to exhibit the artist’s work to demand his release. The German Government is mediating with the Cuban authorities in favor of Lavastida, sources from the German Foreign Ministry told EL PAÍS. Both the Embassy and the EU delegation in Havana have protested his arrest and called for his immediate release, reports Elena Sevillano from Berlin.

Coco Fusco is a Cuban artist and teacher in New York who has kept in touch with her persecuted colleagues. He considers that part of the repression is due to the fact that artists have managed, with creativity but also greater access to technology, to break the images of Cuban propaganda and become spokespersons for what is happening on the island. “They represent a very wise sector in relation to technology, many have traveled, they have contacts abroad, they know how to articulate their lawsuits and complaints in a sophisticated way, and they understand how to handle the image, which is the only thing that Cuba has produced: the a dream of the revolution turned into a consumer product and image ”, explains Fusco.

“State security has decided to declare war against all those who complain because they know that the country is politically vulnerable.

For this same reason, the Government has tried to limit the access of artists to social networks through the monopoly it has with the island’s communications company, Etecsa. The COUNTRY tried to communicate with one of the artists who were temporarily detained by the police, Tania Bruguera, but one of her relatives explained that her landline had been tapped by state security, and her internet access was also cut off.

“State security has decided to declare war against all those who complain because they know that the country is politically vulnerable,” adds Fusco. The country is going through an acute economic crisis due to the pandemic and the decline in tourism that translates into a lack of food or medicine. Not only artists protest against this situation, arbitrary arrests of those who denounce the crisis have become a constant. “In Cuba they can take your phone away if you record a scene that portrays what is happening,” Castillo exemplifies. 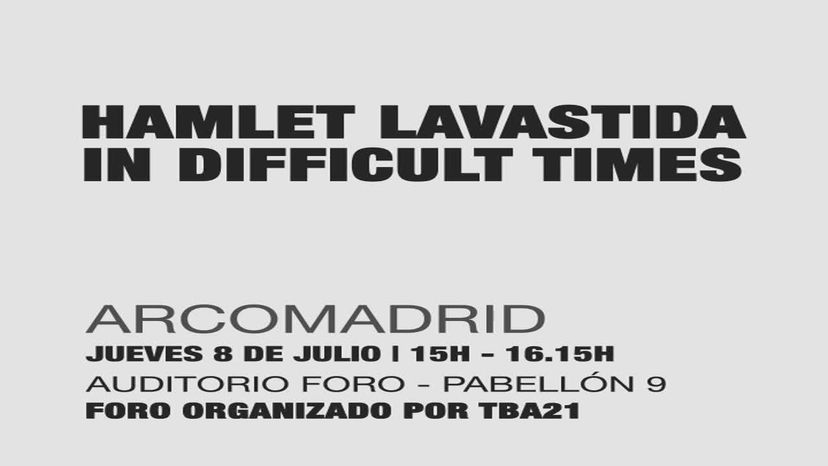 The artist Luis Manuel Otero is one of those who have been arrested dozens of times, the last in April. “I have 24-hour surveillance at my house,” he says from Havana. He says that this last arrest occurred just before the inauguration of the eighth congress of the communist party in Cuba, when he was holding a performance of protest in his house against the repression of the Government. They detained him temporarily and took some of his works. After unsuccessfully asking for his return, he went on a hunger strike. Several of those detained and watched were in a demonstration on April 30 in support of Otero, such as the journalist Esteban Rodríguez or the activist Mary Karla Arés (who recorded the violence against that protest on networks), among others. Lavastida was part of that network protests for the release of her colleagues Otero and Osorbo.

In Cuba, your phone can be taken away if you record a scene that portrays what is happening

For some members of the opposition artistic movement San Isidro, whose headquarters is the house of Otero, this increase in repression also responds to the political situation after the congress of the only party in the country. They are already talking about “Black Spring”, according to a document from this group. Otero goes a little further back: 2018, the year in which some artists organized the Bienal 00 and the Government in response signed Decree 349, which regulates (and censors) the artistic sector. “That connected a great group, we are already a great intellectual mass of artists,” says Otero. They have lost the fear of even standing in front of the Minister of Culture, with whom, as Castillo recalls, after several meetings, communication has ended. “There is a new process that is the commitment of a generation with a change, and that goes beyond fear. We are hyper-connected, and ready to give our lives, if necessary, for this story, ”says Otero from Havana.