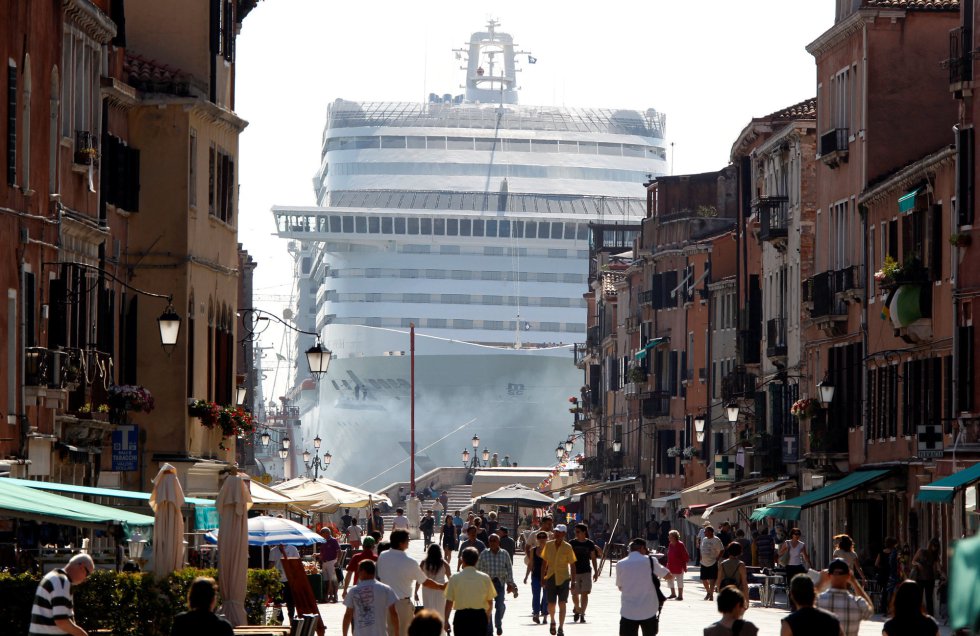 The Government of Italy hits the table and definitively prohibits the entry of cruise ships in Venice. After the measures taken in the middle of the pandemic last April have not been respected and the large ships once again plow through the waters of the lagoon, the council of ministers today approved a decree law that closes history completely . It does in extremis, just two days before the Unesco meeting in China began in which the advisability of placing Venice on the list of the 53 endangered goods in the world should be discussed. A decision, which will take effect in the next few days, with broad cultural and economic implications.

The international organization was stunned in mid-June, when the cruise ship MSC Orchestra, of 92,000 tons, it crossed the Giudecca canal in front of San Marcos Square as if the Executive had not announced the end of this type of situation for months. It was the first large cruise ship to return to the city after the 18-month hiatus caused by the pandemic. During that period, these vessels did not enter Venice due to the restrictions imposed by the coronavirus and their absence contributed to improving the quality of the water in the lagoons. In 2018, 594 cruise ships passed through the city, almost two a day, docking, disembarking passengers, stopping a few days and then departing. A vital source of income for Venice, but incalculable damage to its heritage and to the environmental sustainability of the lagoon. For this reason, the Executive is now also committed to granting aid to the region, the City Council and the affected companies.

The new decree will affect vessels of more than 25,000 tons, those with a length greater than 180 meters or a height of 35 meters. Also, from an environmental point of view, to ships that produce more than 0.1% sulfur. Basically, the calculation made by the Executive is that the vessels that will be able to continue passing through the lagoon will be those that have less than 200 passengers. The decree will come into force in the next few days and will eliminate the confusion of the previous measure.

The Government stipulated in April that, in a first phase, the large ships would dock in the industrial port of neighboring Marghera, a town belonging to the municipality of Venice located to the west of the city and on the mainland, also bathed by the Venetian lagoon. The proposal, which did not have the support of the anti-cruise associations, was a temporary solution, since the objective was to completely remove the large-tonnage vessels from the lagoon. The Executive announced that it would launch a contest to choose an alternative port terminal away from the area for vessels of more than 40,000 tons, with the aim of solving the problem “in a structural and definitive way.” But the times were lengthening greatly and the legal loopholes of the initiative of the Executive allowed the return of the great ships.

The Palacio Chigi has issued a statement in which it welcomes a measure much debated in recent days in the different formations that make up the Executive unit. “It is an important step for the protection of the Venetian lagoon system. These regulations will intervene immediately with the caution and the necessary aid to mitigate the impact on employment in the sector. They will be added to the competition for ideas for the future creation and management of berths outside the protected area of ​​the lagoon ”, he says.

The conflict and the tug of war between the authorities and the neighbors comes from afar. In 2013, the Government prohibited access to the Giudecca Canal for vessels exceeding 96,000 tonnes, but the rule was withdrawn shortly thereafter. In 2017, new plans were also announced to tackle the situation, which included, among other measures, the diversion of large ships to Marghera, but they were never fully implemented. There was also talk of a private project to build a berthing point on the edge between the lagoon and the open sea, but it did not get the approval of the City Council or the Ministry of Transport. That same year, several associations launched a popular referendum, without any legal value, for the inhabitants of the historic center of the city, where 53,000 people live, to vote if they wanted to expel the large ships from the lagoon. About 25,000 citizens participated and the yes won by 98.7% of the votes.

The decree approved by the coalition government chaired by Mario Draghi now substantiates this historic claim. But it will also have to make accounts with the economic demands of the injured assumptions.