Manuela Mena: “Do not play the ‘caravaggio’ until it is in a large museum” | Culture 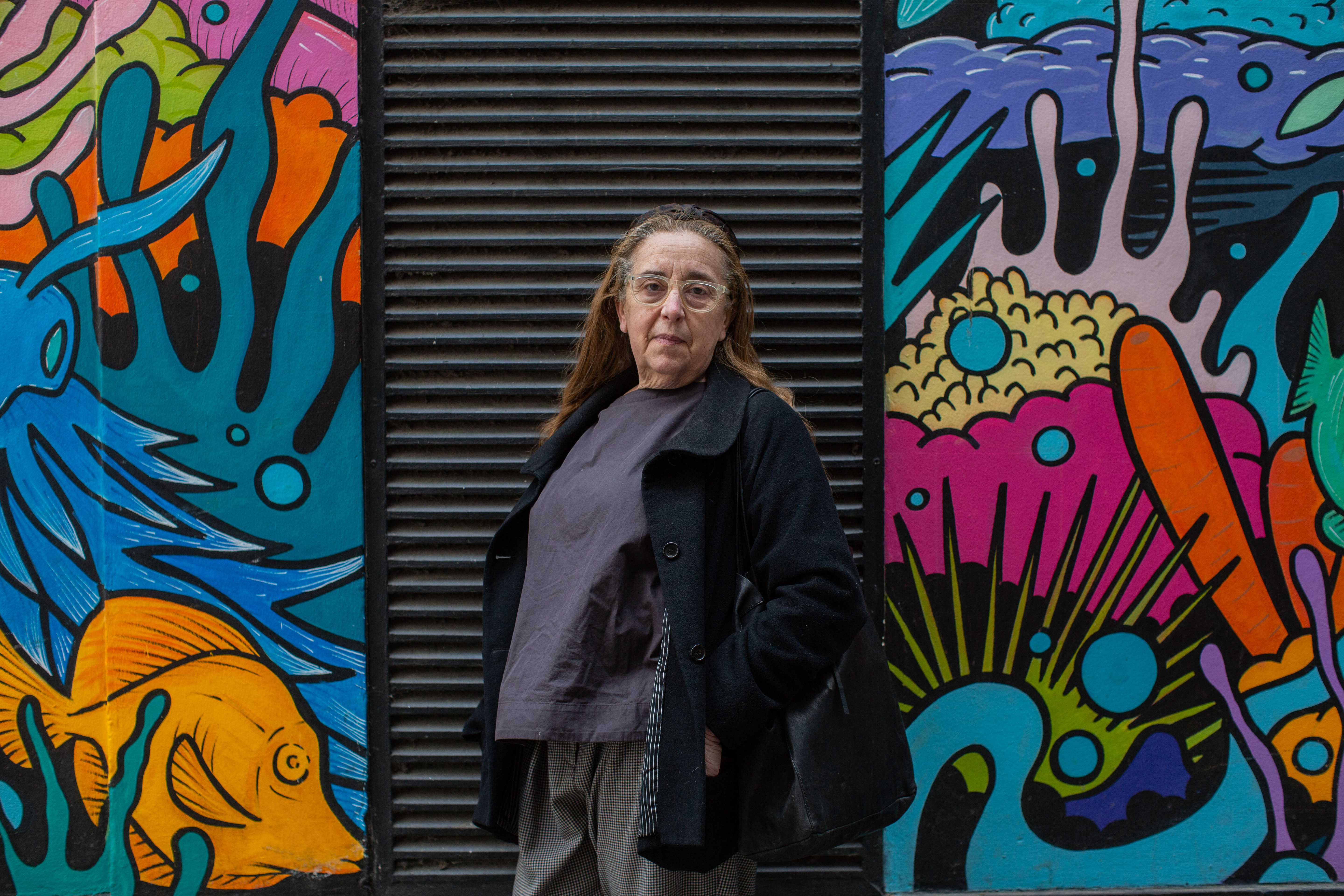 About Goya, his passion, he likes everything, and when he talks about The executions, One of his favorite paintings, Manuela Mena, a 72-year-old from Madrid, doctor in Art History and former deputy director of Conservation and Research at the Prado Museum, cannot help the questions regarding this time. On the assumption caravaggio that was going to be auctioned, is blunt: it should not be restored, or even touched, even though it is dirty. “It would be an attack on a work of art,” he says. In the interview, done by Skype (she lives a long time in England), she points with her finger as if she wanted to explain the dangers of the current cockfight that Spanish politics has become. That finger is the metaphor of a gunshot. Those wrapped bullets had not yet emerged in the Madrid campaign, so what the historian says about the Civil War, the most serious episode in Spain in the 20th century, underscores her amazement over the climate that has been created.

Question. What do we do with the assumption caravaggio?

Answer. I have not seen it in nature, but it seems to me that it is Caravaggio. I saw a bad photo that they sent me from EL PAÍS and it already seemed authentic to me. Then I saw it more and I still maintain that belief. You should go to the Prado Museum. Then the story emerged that it had been a work exchanged by the Academia de San Fernando with one of its members in 1823. That gives it a pedigree, although it is also possible that it was a copy. But, although I have yet to see it, it seems to me an original by that painter. And what do we do? This painting is a private property, but I believe that it is already within the system of Asset of Cultural Interest (BIC) of works of historical importance. It has a protection and cannot be touched by just anyone. What’s more: don’t touch it, it can’t be restored. It is not necessary to restore a work until it is inside the museum and it is concluded that it would have to be cleaned because it would be better that way. If not, touching it would be an attack on a work of art, as I have seen so many. You have to be very careful. It cannot be placed in the hands of just anyone, nor can it be placed in the hands of anyone, because it seems to them that it is dirty. You don’t need to clean it until you enter a large museum.

P. EL PAÍS published that the Academy delivered that painting because it did not know its origin.

R. The San Fernando Academy of the 18th century is not the same as current art research. At that time the origin was not of any interest, that was not going to move them to do one thing or another. Caravaggio was an artist not appreciated by the movement of the 18th century, classicism, neoclassicism, the taste for antiquity in painting, and he was still a curse for having used nature, reality and gloom, something that generated a debate tremendous on whether that could be done or not. A discussion between the classicist supporters of Carracci and the naturalists of Caravaggio, which filled the seventeenth century. Caravaggio was not granted that height. Therefore, that the academy had it in the 18th century … well, I don’t know why it would enter. And the academy delivers it because it is a work by an artist who in that century is not as interesting as Alonso Cano could be, classic, calm, what was worn at that time. So he gave himself up in exchange for a alonso cano. Pérez de Castro would do it with that idea and not because, as is said now, they did not know the origin of the caravaggio.

P. Continuing with the present, today is May 3. You say that The executions it should be taught to children and that it would not matter if they had nightmares.

R. That’s how it is. I say it now again. It is very interesting to me that the May 3 it gave me nightmares, but I don’t know if it would happen to others.

P. He could also say what he said years ago about the need to create a Ministry of Understanding between Autonomies.

R. I don’t know if I said it, but it seems like a good idea. It was as a result of that plane crash that left Barcelona and crashed in the Alps. He was with fifty children who had been making Catalan friends. And that, that children become friends from other places, we do not have it even among our autonomies. Every year my parents took my brother and me to see a different place in Spain, and they always gave us a positive view of the people and their places. At 15 he knew Spain well!

‘Shootings’ should be taught to all children

P. Now we live like a club fight that recalls moments before the Civil War. You alternate countries. Do you see something similar out there?

R. Political tension exists everywhere. I attended here [en Reino Unido] two years ago to an impressive demonstration against Brexit. It was absolutely peaceful. In Parliament they are less peaceful: there are insults, shouts, boos. Since I was little I was interested in politics, since when the press only said what happened abroad. And now I see parliamentary sessions in Spain and in other countries. The parliamentary violence of the English is mask, because deep down they are not violent, they are courteous. This one in Spain is a pre-civil war violence. If we were not in the EU, things would be much more dangerous. My parents and my grandmother told me how the Civil War was prepared. He had a real obsession for that episode. He was in the Casa de Campo, on the Valencia front, he was a cultural militiaman of the Communist Brigade, dedicated to teaching reading and writing. After the war there were people who knelt to kiss his feet because he had taught them to read.

P. And how did he tell her that this violence had come?

R. People wore espadrilles, shoes were rare. It is already known what determined the beginning of the war. It was the murder of a person [José Calvo Sotelo, líder de Renovación Española]. That is the most dangerous thing, that the shot is fired. Let’s hope it doesn’t come to that.

P. The art you have seen is full of symbols. Those two paintings by Goya, Cudgel duel Y Half-sunken dog, apart from The executions, They come to mind as soon as they talk about that violence and the current moods.

R. Goya is so varied that you can think of it Cudgel duel, for example. However, In my first steps in art, the artist who helped me the most is Nicolas Poussin, a seventeenth-century Frenchman, a kind of boiling cauldron that calms his deep dissatisfaction with painting.

P. And that dog de Goya is sunk or rising?

R. He is receiving his master, because Goya was very fond of dogs. He had that modern sensibility that Frederick the Great or Catherine of Russia also enjoyed, who buried himself with their dogs. Goya speaks in his letters of the animals. I am sorry that I do not have a deep symbolic vision towards that work like the one we have today, although it seems very good to me. For me, that dog is looking at the entrance of the master, he is saying “he is coming”.

This one in Spain is a pre-civil war violence

P. He said that Spain saves their fights in large part because it is in the EU. And the Brexit that it means in that country that has left the Union?

R. They are desperate because they have no fish. Others are because there will be no protection for animals or plants as there was with the EU and because now horrible meat will come from the US They are realizing the mistake they made. Among them, giving up Erasmus … As for Europe, I think there should be a political union and not this thing by halves. And that union should have a true single command.

P. You were marked by the reading that your parents instilled in you, also of books then prohibited. And the other fact was that his parents made him look The executions when at the age of three you had your gaze at the level of the eyes of the murdered.

R. They took me to a school run by nuns because they wanted me to study French, and there was no way to do it in a secular school. My father thought that he had suffered for not believing in God, and that if we learned among nuns, that psychological suffering we were not going to have. He was an optimist. Read The priest of Monleón, of Pío Baroja, and I said goodbye to the Church. As for the forbidden books, my father read us something every night. When he came to a delicate scene, he would say “ahem, ahem” and skip it. And immediately my brother and I were going to read that, which at one time was Voltaire. Voltaire should be read by all the children in the world.

R. Ah … My parents took me to the Prado very early. The painting that I liked the most was Nymphs chased by satyrs, by Rubens. Among Goya’s paintings, the May 3 was in the foreground. There is that dead man with his arms out, his head shattered by the shots … A friend who was in the Yugoslavian war told me that the effect of the painter’s shots is perfectly described. The height of my eyes was there. My parents told me: “Look at the white shirt”, but all I could see was the dead man’s head. It gave me nightmares for years, I contemplated on the street corners scenes similar to those I had seen in that painting, probably conceived with the intention of showing the hideous violence of war.