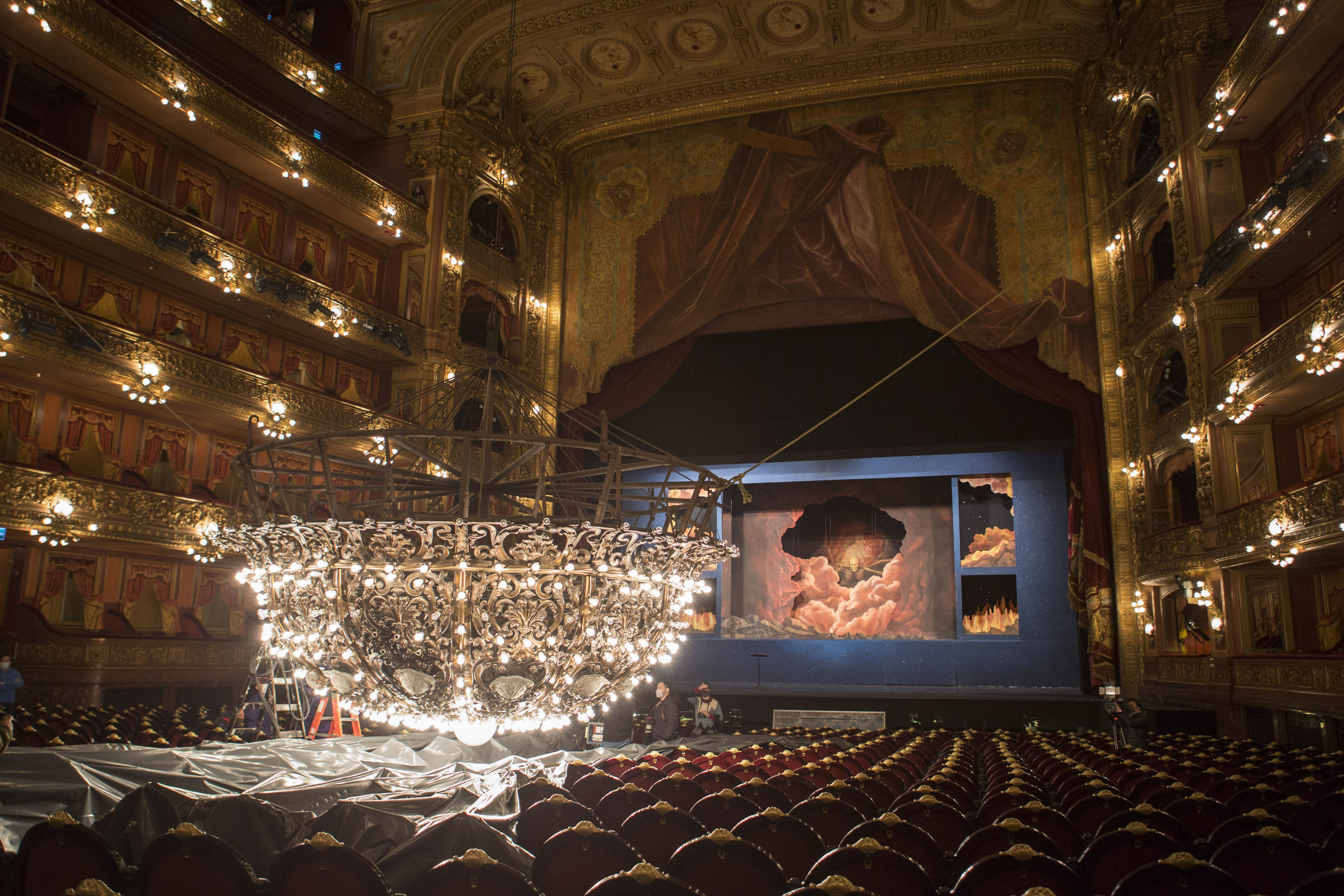 The Colon Theater in Buenos Aires this Tuesday lit the 552 bulbs of the majestic chandelier that crowns its main room. A team of 25 technicians lowered this 1,300 kilogram lamp, built in Europe at the end of the 19th century, to the height of the stalls for maintenance, as part of the set-up of the largest lyrical coliseum in Argentina on the eve of the delayed opening of the 2021 season, after the closure imposed 15 months ago by the covid-19 pandemic.

“Turning on the lights in the main hall is also turning on the lights of culture and art, which help us to go through this rare and difficult moment that we are living,” says the general director of the Teatro Colón, María Victoria Alcaraz, after supervising maintenance work.

The chandelier, five and a half meters in diameter, is supported by a thick cable from the dome, 30 meters from the ground, but also by two ropes tied to the side boxes on the third floor. Throughout the morning, the technicians replace the light bulbs distributed in 12 lampshades, clean, check the mechanisms and circuits and carry out tests to verify that they are switched on, off and cooled down correctly.

The coliseum will reopen its doors to the public on Friday with a concert by the Buenos Aires Philharmonic Orchestra under the baton of maestro Enrique Arturo Diemecke. It was scheduled for early April, but had to be postponed due to the restrictions imposed by the Alberto Fernández government in the face of the arrival of the second wave of the coronavirus pandemic, which has already caused more than 93,000 deaths in Argentina. Since mid-June, with the decrease in the number of cases, Buenos Aires has begun to reactivate its cultural activities under strict protocols, which include reduced capacity in closed spaces. In the case of the Teatro Colón, 50%.

“Cultural activity is essential, because it goes beyond mere entertainment. It has been one of the sectors hardest hit by the pandemic and today the return of the Colón is a joy, which has to do with that return of activity to the city, with the cinema, the theater, the music halls ”, says the Minister of Culture of Buenos Aires, Enrique Avogadro.

Last year, the pandemic forced the suspension of the planned programming and the Colón maintained contact with its public through the Internet, with weekly broadcasts and audiovisual bets such as Casas de Ôpera. In the months of closed doors, part of its staff participated in the manufacture of masks and today it attends the covid-19 testing center that operates in the place, through which more than a thousand people pass every day.

Alcaraz is enthusiastic when he talks about the return to the artists’ rehearsals and the last preparations for the imminent inauguration: “We are preparing for a holiday, very happy and excited”. Due to current restrictions, the 2021 lyric season will feature shorter than usual operas and concerts. “We chose works that were not very long instead of cutting them. We are going to see works that are very valuable from the artistic point of view, but rare, such as The Song of the Earth, by Mahler, which we are going to do now, or Altri canti, by Monteverdi, which are three small baroque works united ”, he anticipates. The technicians turn off the lights of the chandelier and begin the slow maneuver of raising it to its usual location, 30 meters high. On Friday it will illuminate a room with an audience again.

Subscribe here to the newsletter from EL PAÍS América and receive all the informative keys of the current situation of the region.