The European avant-garde theater is reborn in Venice | Culture


The Spanish company Agrupación Señor Serrano received in 2015 the Silver Lion of the Venice Theater Biennale, which each year is awarded to creators who stand out for their innovation and experimentation in the field of performing arts. Only another Spaniard, Angélica Liddell, had previously won this prestigious award in 2013, which immediately triggers the projection of the recipient, to the point that the group began to work much more abroad than within Spain. Then came the pandemic and the total stoppage of international circuits, which are still at half gas. But again the key that opens the door of the future seems to be in Venice: the Serranos have returned this week to the city of canals to participate in the new edition of the biennial, which began last Friday and seems destined to awaken the theater European of his long lethargy in parallel to the other great appointment that is celebrated these days, the Avignon festival, opened on Monday.

After a year with all the theaters on the continent closed except the Spanish ones and the creators engaged in a frenzied virtual activity, with continuous broadcasts of shows, debates, courses or workshops on the internet, Venice reappears as the ideal setting to remind the world of the power of the face-to-face theatrical experience, enhanced by the beauty of the city and the stages where the performances take place. From the historic Goldoni theater to the large naves of the Arsenale, a former military shipyard, recovered as exhibition spaces for the successive biennials of art, performing arts, music and architecture (the latter now occupies several pavilions). There is also no lack of claims on the poster: next to the Señor Serrano Group there are names such as the Polish Krzysztof Warlikowski, who on Friday picked up the Golden Lion in recognition of his career; the German Thomas Ostermeier, the Hungarian Kornél Mundruczó and the great British figure of spoken word Kae Tempest, who will receive the Silver Lion on Friday. 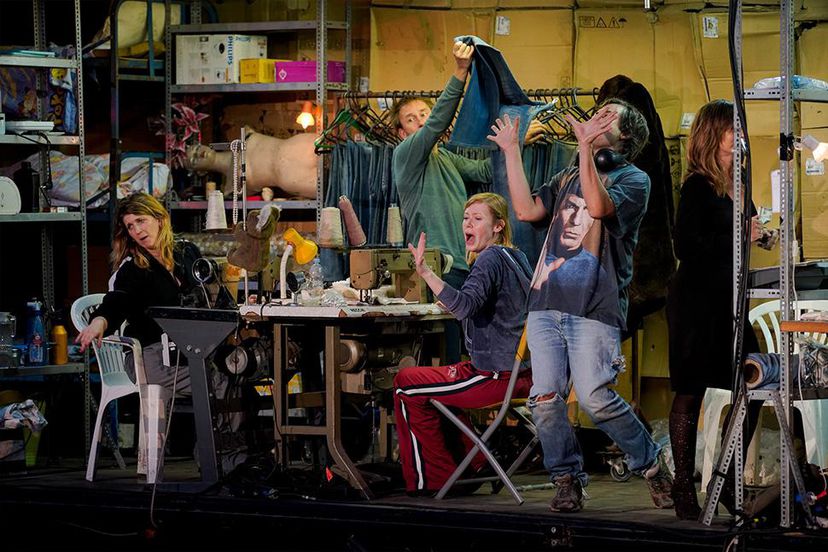 On Tuesday, a few hours before performing his play The Mountain In one of those impressive Arsenale warehouses, in which there are still remains of the machinery of the old shipyard, the two directors of the Agrupación Señor Serrano, Àlex Serrano and Pau Palacios, were happy to return to the festival that six years ago marked ” a before and after ”in his career and that, otherwise, now he is doing it again. “It is important that the big festivals deploy all their resources to stimulate activity. The biennial is a catalyst for spirits and the fact that it is unfolding at its peak is encouraging for the sector, ”commented Palacios. Serrano agreed to his side: “For the first time in many months we feel that the international circuits are being reactivated. Keep in mind that the theaters in Europe have been closed until a few weeks ago and there is still a lot of shyness, but also a lot of desire. Programmers come, companies present new montages and the audience applauds with a special happiness ”.

The applause, indeed, sounded special after the performance of his work on Tuesday. As when it won the Golden Lion, the company once again fell in love with the public with its highly personal scenic language, which combines texts, projections, live video, models and music. They have been developing it in assemblies such as Brickman Brando Bubble Boom (2012), A House in Asia (2014), Birdie (2016) Y Kingdom (2018). On The Mountain, premiered last summer at the Grec in Barcelona, ​​they deploy all these elements (in addition to a drone) to visually assemble several apparently unconnected plot lines but that end up fitting together as a conceptual puzzle that explores the meaning of the term “truth”: the death of the mountaineer George Mallory on Everest in 1924 without it having been ascertained so far whether he reached the top, the confusion caused in 1938 in the United States by radio broadcasting War of the Worlds narrated by Orson Welles and Vladimir Putin’s lectures on fake news, confidence and power.

The directors of the company also remember that when they received the Silver Lion, apart from the joy of the moment, they were not fully aware of what it meant to have won the award. Although an anecdote that happened then at the Venice airport back to Spain gave them the first clue: “We did not want the sculpture to travel in the hold of the plane and I put it in my hand luggage, but as it is metallic they detected it in input controls. An employee warned me that I had to check in ‘the object’ or leave it there, but when I showed her what it was, her face changed: she touched it, admired it and let me take it with me ”, Serrano sums up. Confirmation that this was indeed a very good thing came soon after, when they began to be called upon by programmers from countries they had never been to and also to get major European theater festivals and institutions involved in the co-production of their new shows. Something that, surprisingly, happens much less in Spain. In its 15 years of experience, they have not yet stepped on the tables of the National Dramatic Center or those of the National Theater of Catalonia, where the company is based.

It was not The Mountain the only show that could be seen on Tuesday at the Biennial. On a stage near the Arsenale, Other State, a unique version of The life is dream in charge of the Lenz Foundation, an Italian company that has been working with people with various disabilities since 2014. Calderón’s verses sounded more shocking than ever in the mouth of Barbara Voghera, an extraordinary actress with Down syndrome whose interpretation, close to expressionism but at the same time very poetic, illuminated with new senses the famous monologues of Sigismund on freedom, identity and reality.

Another highlight on Tuesday was the proposal by the Hungarian Kornél Mundruczó, whose always radical, uncomfortable, harsh, violent and tremendously realistic productions have revolutionized the European scene in recent years. Perhaps best known to the general public for his role as a filmmaker, especially since the premiere last year on Netflix of his latest film, the demolition Fragments of a woman, Mundruczó presented in Venice Hard To Be a God (It’s hard to be a god) which expresses without sparing details the drama of four women kidnapped by human traffickers. Next season the Hungarian will visit Spain for the first time with another show, Imitation of Life, what will be seen in November at the Valle-Inclán theater in Madrid Y in April 2022 at the Lliure in Barcelona.

This Thursday it is the turn of Thomas Ostermeier, director of the Schaubühne Berlin, who will present his stage adaptation of the novel Who killed my father by the French Édouard Louis, played by the writer himself. The show premiered in the brief days of last September when the theaters were open in Paris and now it is back on track. And on Friday, the delivery of the Silver Lion to Kae Tempest, who will also offer her poetic recital on Saturday The Book Of Traps And Lessons. The biennial will close on Sunday with the show Sunday, from the Hungarian company Hodworks.

They write in his presentation Stefano Ricci and Gianni Forte, the recently released directors of the biennial, who have designed this edition on the idea of ​​“a new cultural Renaissance to put theater art back in the place it deserves, in us, in the eternal magnificence of the divine”. And also as an event that helps to rediscover Venice in another way, “that island that does not exist, swept away by a pandemic that has erased everything.” These days the city clings to the hope of an alternative horizon to tourism, perhaps by way of culture and art, but the streets and hotels are starting to fill up again. In recent weeks, several cruise ships have extended their giant shadow over Saint Mark’s Square.